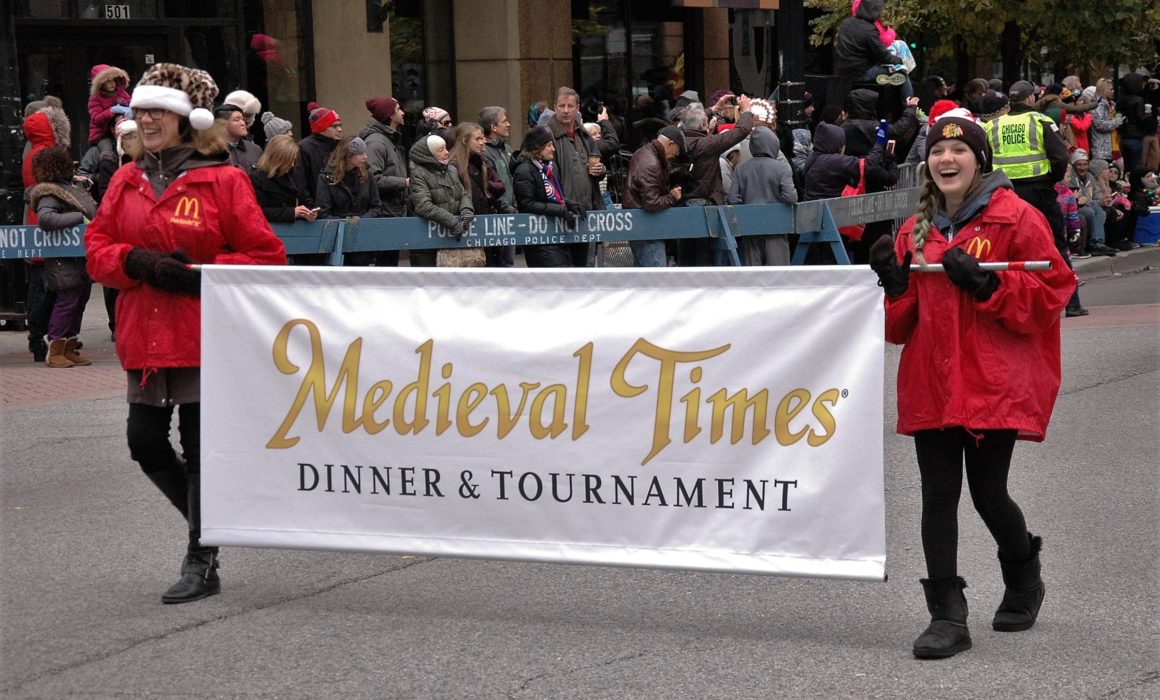 Many of our volunteer positions have an essential role at the Chicago Thanksgiving Parade. Our banners carriers have an important part IN the parade.

That’s right; our banner carriers are truly in the parade. These volunteers walk, with a partner, in the parade, carrying a banner in front of a parade unit.

“One of the best things about being a Banner Carrier is getting to volunteer with a friend or family member,” stated Dan Mulka, former Event Manager and long-time volunteer of the parade. “It’s pretty surreal when you’re walking down the parade route with someone you know, and you’re just looking out at the hundreds of thousands of spectators on State Street.”

Anyone over 12 years of age can apply to be a volunteer banner carrier. Applicants will need to be in good health and able to walk a minimum of two miles.

You can find out more about Banner Carriers, and all of our volunteer positions, by visiting https://www.chicagothanksgivingparade.com/volunteer-positions-2019/. The story starts with Robin, mother of Madeline. Robin grew up in the Chicago neighborhood of Mayfair (just west of the 90/94 split). Later, her parents moved to Florida.

In the 1980’s, Robin met her future husband, a native Norwegian. The couple married, and decided to move to Norway and start a family. “Norway is every bit as beautiful as it is in pictures, and the people are so kind,” stated Robin.

Madeline was born in Haugesund, Norway. “You could say it’s a pretty windy city as well,” added Robin. Madeline started university and at the same time, worked for a Scandinavian event company, JCP Nordic. After graduating, she was offered the position of Full-Time Event Manager. “It’s her dream job,” noted Robin.

There are numerous festivals, fairs, marathons, concerts and charity events happening non-stop in Oslo. “As her mom, I think it’s fun to see her work at an event where she’s hooked up to multiple phones and radios,  multitasking every moment of the event. It’s exhausting!” stated Robin, “The work that goes on behind the scenes so that those attending an event can just relax and have a great time for one day is overwhelming.”

Robin will be in Chicago for the Radiological Society North America conference, and she’s bringing Madeline to see her home town. “I mentioned to Madeline that we should volunteer, and before I knew it, she volunteered and suggested that I do the same.”

Robin continues, “I’m lucky to have an adult daughter that enjoys doing things with her mom and enjoys helping others. What better way to spend Thanksgiving morning than volunteering with the people of Chicago, giving thanks for all that we have, and spending time doing something fun like helping out at the Chicago Thanksgiving Parade.”

What does the duo be doing after the Parade? “We have planned Thanksgiving dinner together at Palmer House. I’m looking forward to all the good food in Chicago, and I’m sure we’ll find time for shopping and a show or two.”

You and your family can make a volunteering a family affair at this year’s Chicago Thanksgiving Parade. Anyone 12 years of age and older can apply for one of many positions at https://www.chicagothanksgivingparade.com/volunteer-positions-2019/. Your organization can support the many volunteers that generously give their time to help put on the Chicago Thanksgiving Parade – through donating an item to either our volunteer gift bag or our volunteer raffle.

And we’re going to help promote your company to one of the best volunteer programs in the city!

Now, our volunteers really are the backbone of this parade – it simply wouldn’t go ahead without them. With that said, we’d like to include your organization in our Gift Bag and Raffle when you donate to our Volunteer Program!

So how does it work?

Your “Gift Bag” donations will be given out to our amazing volunteers and VIPs at the 2019 Chicago Thanksgiving Parade.

Plus, each volunteer will be entered into our “Parade Thank You Raffle” – held during our Thank You Party in January of 2020. We all owe so much to them, and you can be an extension of our city’s gratitude!

To recap, it not only shows your support for the parade and Chicago community but will help promote your company to one of the best volunteer programs in the city!

Donations will be recognized by:

NOTE: Any coupons, discount offers, certificates or tickets must be valid through June 30, 2020.

Please fill out the official online donation form here.
Items must be received by Thursday, November 14, 2019.   And once again…thank you for your support and generosity!

Support our Volunteers
Click here to fill out the donation form He’s worked on the tarmac at O’Hare Airport, as well as the grounds crew at Wrigley Field.  He’s a business IT consultant, musician, and actor.  He’s part of the core team at Chicago Med and is John Cusack’s stand-in for the upcoming series Utopia.

John has done a bit of it all here in the City of Chicago.  And, he’s back volunteering for his 15th Chicago Thanksgiving Parade.

“The Parade has been as much a part of my Thanksgivings as stuffing and canned cranberry sauce,” stated John.  “And thanks to the Parade’s small but dedicated staff, the Parade and even the meetings leading up to the parade are something I always look forward to.”

John is currently the Volunteer Chairperson for the Balloon Committee.  You might have seen him in media interviews for the Parade, and surely, you will see him in balloon staging every Thanksgiving morning.

John adds, “My favorite balloon over all of the years has been Spongebob Squarepants. The coolest thing about having Spongebob in the Parade is that the footage was used in the movie, The Weatherman.” We need 1,000 volunteers to produce the Chicago Thanksgiving Parade, Where Thankful Hearts Gather. The one thing better than volunteering is volunteering with friends and family members. We do our best to honor all group requests, and the best way to get paired with a group to apply today!
Below, we list some of the best volunteer positions to work with as a group. Please note that you must be at least 12 years old to volunteer for the positions listed. Banner Carriers
Bannier carriers are paired off in twos and walk in the parade with a sponsor or unit banner.  If you have more than two people, we’ll line you up in order (your friends will be carrying the banner(s) behind you). Staging or Disband
Your group of 2-4 people will help organize our parade units in the staging area (beginning of the parade) or help direct units to disband (end of the parade).  You truly will work as a team to efficiently manage our performance groups.

Poo Crew
Your group of 3-4 people can dress up, decorate your poo bin, and make sure nobody steps in “it.” These volunteers get the largest cheers, and at the same time, you can encourage spectators to cheer louder. Do it right, and this will be the most fun you’ve ever had on Thanksgiving!

Every volunteer role is important, as each role is vital to our goal of creating smiles across the nation – right from State Street in Downtown Chicago. Find out more about our volunteer positions by clicking here.